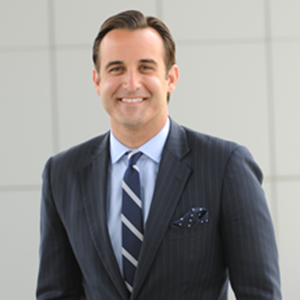 Jason Grill is the Founder of JGrill Media, a consulting firm that specializes in public affairs, strategic communications, advocacy, public policy and media. Through his consulting firm, Jason assists AAKC as a consultant on public affairs and policy issues, as well as strategy and messaging. Jason has extensive experience working with individuals, organizations, foundations, associations and businesses of all sizes on strategic public affairs on the local, state and national level. In addition, Jason is a Senior Advisor at Parris Communications, host of the Grill Nation Show on KMBZ 980AM (Also on iTunes) in Kansas City, and a licensed attorney in Missouri and Kansas. Jason is a former two-term member of the Missouri House of Representatives and has worked in the White House and at CNN. He has successfully exited a company he co-founded, Sock 101. Jason appears regularly as a guest panelist on KCPT's Ruckus (PBS) and as a political analyst on Fox 4 in KC. He has been featured in The Huffington Post, Inc. Magazine, Forbes and Politico. Jason graduated Summa Cum Laude from Saint Louis University with a BS in Business Administration (Major - Economics / Minor - Political Science) and earned a Law Degree with a Certificate in Dispute Resolution from the University of Missouri. He is also a graduate of the Kansas City Tomorrow Program, FBI Citizens Academy and the Socrates Program at the Aspen Institute. Jason has served as an advance site lead for Presidential, Vice Presidential and Principal Visits to Missouri and Kansas.He has received numerous professional awards throughout his career such as the Kansas City Business Journal’s Next Gen Leader Award, Ingram’s Magazine Forty Under Forty Award, Boy Scouts of America’s National Outstanding Eagle Scout Award, Autism Speaks Advocacy Award, University of Missouri School of Law Distinguished Graduate Award and many others.