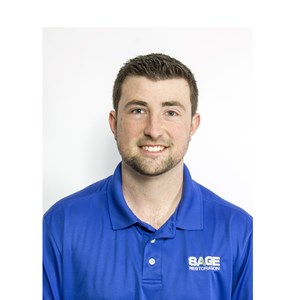 Connor has been involved in the company in some capacity since it was opened almost 12 years ago and has worked in all aspects in the field and upper management. Connor has advanced to the role of President of Sage Restoration in only five years from his beginning as a full-time employee at the age of twenty-one after attending KU. Connor has been a large factor for the continued growth at Sage Restoration because of his leadership, tenacity, strong sales and customer service abilities.

Connor is engaged to marry his fiancé, Lexi, in January of 2023 and they have two beautiful German Shepherds who keep them busy on the home front. In their free time they both love spending time at the lake in the summer months to get away. When not at the lake, they love spending time with family and friends and during football season, you can catch Connor and Lexi on Sundays at Arrowhead cheering on the CHIEFS!!